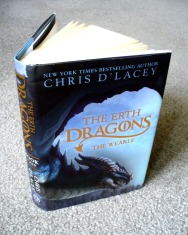 For anyone who is unfamiliar with my work, I’m best known for writing books about dragons.  It wasn’t a lifelong desire.  Up until it actually happened, I had no particular interest in the subject.  That all changed when I wrote the first book of the series that eventually became known as The Last Dragon Chronicles.  The one question I’m commonly asked is: What inspired you to write about dragons?  Quite simply, it happened by chance.  Regular fans will know that I’d written a little tale about squirrels and needed to give the mum in the story some kind of job.  While I was thinking about it, I stumbled across a lady who made beautiful clay dragons, which she sold on a market stall.  That seemed to be the perfect role for a mum working from home.  Little did I know that the dragons would not only come to take over the story, but spawn a seven book series that is still popular to this day.

By the time The Last Dragon Chronicles was complete, I was fascinated by the creatures.  I wrote three more series about them: The Dragons of Wayward Crescent, which was a younger spin-off of the Chronicles; The Erth Dragons, a powerful three book series that told the story of the failed colonisation of ‘Erth’ by a wearle of sixty dragons; and The UNICORNE Files, a contemporary series about a boy gifted with the power to alter reality after he receives an implant of dragon DNA.

You can find out more about all of these books by visiting my Icefire website.  Enjoy!